Gabriella Coleman & The Growth Of Anonymous 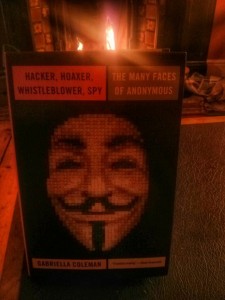 “Here we have these people who can coordinate with a few other people and enter into corporations and governments and siphon off politically sensitive data and information that point to malfeasance and corruption. Holy shit. Thats a big deal.”

I recently caught up with Gabriella Coleman, social anthropologist and author, as she launched her now book “Hacker, Hoaxer, Whistleblower, Spy: The Many Faces of Anonymous” in Dublin.  We began by exploring the cultural origins of Anonymous and its relatively rapid evolution from within a subculture of trolling and lulz, to one of the most iconic, yet opaque, political actors on the global stage in recent years.

We look at how Anonymous reinvigorated visible transgression of both law and ‘respectability’, and sharpened by the experiences of challenging the Church of Scientology it mushroomed and rampaged through servers and websites whilst supporting ‘real world’ struggles as corporations and nation states struggled to respond to the reality of political hacking.

This isnt without a series of problematics, be that the tensions between free speech and hate speech, the doxing of ‘innocents’ and attempts to balance the use of mainstream media from within a framework that at its core rejects individualism

Gabriella then outlines the political repression -including informers- that the US state brings to bear in an attempt to disrupt a political movement that, whilst quietened in western Europe and north America, continues to grow in Latin and South America.